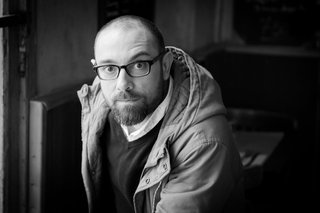 Julien Hazemann was born in 1978. He is based in Lannion, in French Bittany

He comes from the cinema. He started in the 2000s to work on films as an assistant director, then as a location scout. From basements to rooftops, he explores the Paris region with a camera in hand. He is interested in places. He looks at them through the stories they carry. A face, for him, tells something, a wall too.

He cultivates the taste of exploring and telling stories until he takes his camera and a plane ticket and goes for a walk a little further. He looks for places, universes. He goes through Cairo in the middle of the revolution, through New York where he looks at the modernity of the 20th century, and through Shanghai where he discovers that of the 21st century. And from Shanghai, he went deep into China and its transformations. He returned several times and published his first photos in Geo.

While photographing places, he started to work on the people who live there. He quickly became interested in the way urban transformations change people and produce lifestyles. For him, people make cities, of course. But at the same time, cities make people. From places to people, he is passionate about behavior and the social, political and historical perspectives that run through them.

It is through this anthropological and geographical approach, influenced by the theories of the Anthropocene and the generalized urbanization of the world, that he began his work documenting the making of the city in the 21st century. He mixes long-term fieldwork and collaborations with researchers to propose a new imaginary of the city and the urban.

First in Chongqing, China, where between 2010 and 2017 he made Min Gongs, the People of Work. He then pushed his exploration of the generalized urbanization of the world in other cities and on other continents, from Delhi in India to Dakar in Senegal via Dhaka in Bangladesh and Brittany in France.